The agrirouter world is getting bigger

The solution to a core problem in agriculture has been online since February 2019 and not only the number of users is growing steadily: the consortium behind the web-based data exchange platform agrirouter can also report a significant new addition. CNH Industrial (CNHi), one of the world's largest manufacturers of agricultural machinery, has agreed to join the consortium at the beginning of 2020. 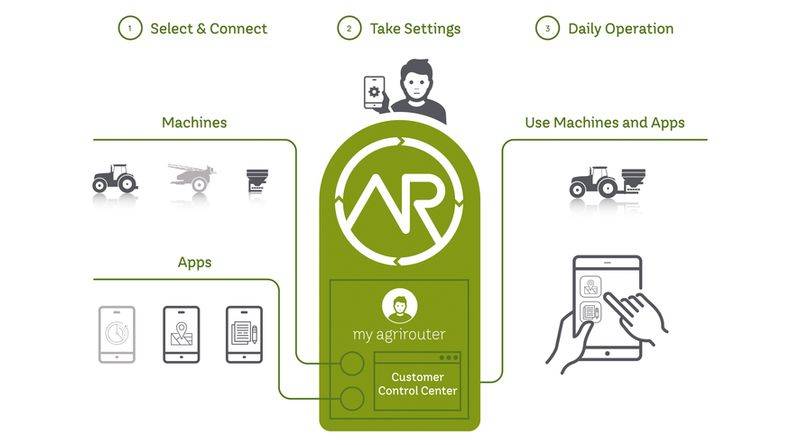 This will also make the Case IH, New Holland and Steyr agricultural technology brands agrirouter compatible. The list of our partners has also been significantly extended until Agritechnica 2019. We look forward to working with (in alphabetical order) AgForce, exatrek, Helm AG, JoinData, Nevonex (Bosch), Plantivo, Solorrow, Trimble, TTControl, Vintage and Xarvio from BASF.

There was further good news for the agrirouter team at Agritechnica: With JoinData, a Dutch company is joining the circle of partners that has specialized in data management for the ag-ricultural interior and thus perfectly complements the arable farming focus of the agrirouter. (see separate press release) At the same time, the number of users is growing. The continuous further development of the agrirouter ensures that the setup and handling of the data exchange platform is becoming ever easier for users.

According to marketreportsworld.com, an international provider of commercial market analyses, DKE-Data is already one of the top ten data exchange platforms worldwide.

In the meantime, the agrirouter developers are connected with more than 130 (as of Novem-ber 2019) software and hardware providers, almost two thirds of them from the international environment with a focus on Europe, but also the USA are well represented. And more and more providers are integrating the agrirouter interface into their systems. This can also be done via cloud connections. Multiple clouds can exchange data with each other via standard-ized data protocols.

The agrirouter uses standardized protocols. In addition, however, the agrirouter provides the farmer/contractor with additional functions such as access rights and data control options in a central location. Furthermore, the agrirouter can serve several different data targets simulta-neously. In this way, farmers/contractors remain independent from machine manufacturers and are not subject to restrictions on direct connections from individual manufacturers.

With the neutral data exchange platform agrirouter, any software applications can be con-nected via a uniform programming interface (API Application Programming Interface). To en-sure correct functionality, all software vendors and machine manufacturers are tested as part of a certification process. The test criteria of the certification are freely accessible via the agrirouter website. Data exchange via agrirouter works not only with one, but with many dif-ferent clouds, since almost every major provider today offers its own cloud. The cooperation between partners (software and hardware providers) and DKE-Data is regulated in only one contract, which is the same for all partners.

Connected via a standard API, the agrirouter then does what it should: It functions as a man-ufacturer-neutral data exchange platform and transports only on behalf of the user and only the desired data packages from endpoint to endpoint. The user always retains central data sovereignty on his agrirouter. Feedback from farmers and contractors is continuously used for agrirouter's further develop-ment. Above all, the initial setup, the setup of the agrirouter, is simplified. The user creates an account and connects software and machines. Apps and applications are always as-signed to the standard software group, machines to the standard machine group. By default, the two groups are connected by routes for all message formats. Therefore, data can be ex-changed directly after the connection.

Example for data transmission with the agrirouter: 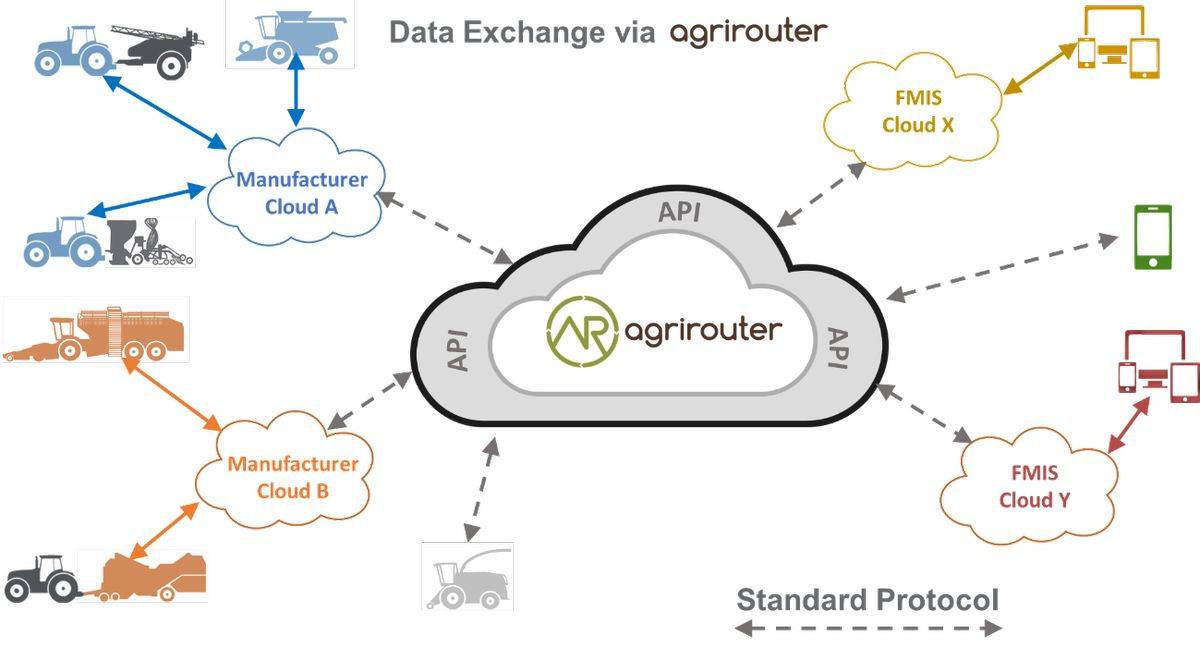 The user does not have to do anything after connecting machine(s) and software. In addition, all messages sent with agrirouter will contain meta-information in the future. This can be, for example, the unique name of an order, but also any other helpful information.

There is also good news for companies wishing to join the circle of agrirouter consorts. Previ-ously, new consortium members had to pay an entry fee, as the agrirouter development costs had originally been borne by the founding members of the consortium, and new mem-bers were to retroactively assume a share of this development expenditure. As planned, there will be no participation in the historical costs from 2020, making it easier for smaller companies in particular to join the consortium. New consortia contribute to the further devel-opment and support the market dissemination. Furthermore, irrespective of the size of the company, each member of the consortium has one vote.

At Agritechnica 2019, all machine manufacturers who are members of the agrirouter consor-tium will demonstrate that they have finished developing the connection of their suitable ma-chines to the agrirouter interface. The same applies to agricultural software providers and producers of telemetry hardware for connecting machines. Further machines, telemetry hard-ware as well as agricultural software solutions are available for connection at short notice.

A learning concept, the so-called LernBox, was developed for agrirouter users. The LernBox enables the user to independently start up the agrirouter without training and to use all avail-able functions. In the agrirouter user interface he will find question mark buttons at different places. These buttons are linked to the LernBox. There are also interactive elements. The user can switch on interactive support for important settings, which guides him step by step through the menus, for example when creating routes.

The usage fees for data transport via agrirouter are low, as DKE-Data GmbH & Co. KG oper-ates as a non-profit company. The agrirouter business model is based on flat rates. It is up to the app providers to determine whether they pass on the fees to their app users (farmers and contractors). There are also mobile phone charges for the transfer of data between the ma-chine and agrirouter.

The approach is supported by a consortium of well-known agricultural technology manufac-turers open to further members who have jointly recognized that Farming 4.0 can only work if data can be exchanged independently of manufacturers and thus without discrimination. From 01.01.2020, the following shareholder brands will be included: AMAZONE, AGRIFAC, BERTHOUD, CASE IH, CCISOBUS, DEUTZ FAHR, FENDT, GRIMME, HARDI, HOLMER, HORSCH, KRONE, KUHN, LEMKEN, MASSEY FERGUSON, NEW HOLLAND, PÖTTINGER, RAUCH, STEYR, TECNOMA and VALTRA (in alphabetical order). Numerous support tools are available for software and hardware developers (partners).

The software supplier of the agrirouter is SAP. The globally operating company guarantees safe operation and international use.