In recognition of its extraordinary past and with an optimistic outlook to the future, Pöttinger is celebrating its 150-year success story this year. Since 1871, the Austrian agricultural machinery manufacturer has always looked for ways to make farming work easier and more efficient. The product range is constantly growing and has always been updated to meet the latest needs and circumstances. The focus was always on the best working results. 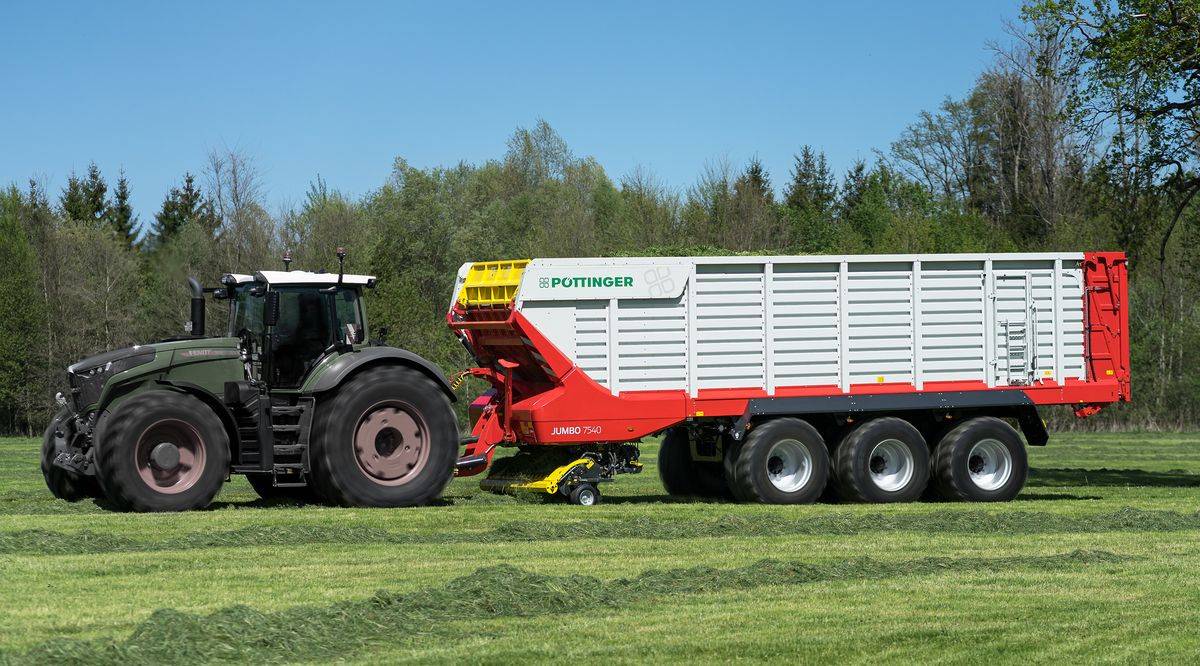 As a master clockmaker with precision, as an artisan blacksmith with a feel for design and as a metalworker ensuring durability and robustness, the company founder had the best prerequisites for turning his inventions into something brilliant. He had already set the bar very high with his fodder cutting machine that started it all. The product range back in the early days also included fruit mills, fruit presses, flour and grain mills for producing fodder, as well as silage and fodder choppers. An excerpt from the history books informs us that in 1927, a fruit and grape mill was patented with the telling name "Alkohol". The product range was constantly extended with presses, circular saws and shredders.

Thanks to the solid workmanship produced by the factory, Pöttinger machines became well known in many parts of Austria and demand increased. Around 1950 the serial production of swath rakes and hay loaders started, machines that were highly regarded in professional circles. The product range at this time was impressive and extended from single and combined swath rakes and trailed mowers to beet and potato harvesters, fruit presses, silage and forage choppers, trailed rollers and various manure spreaders.

Under the motto "Make life easier", Pöttinger developed brushwood chipping machines for forest farmers. This machine was the springboard to export markets. 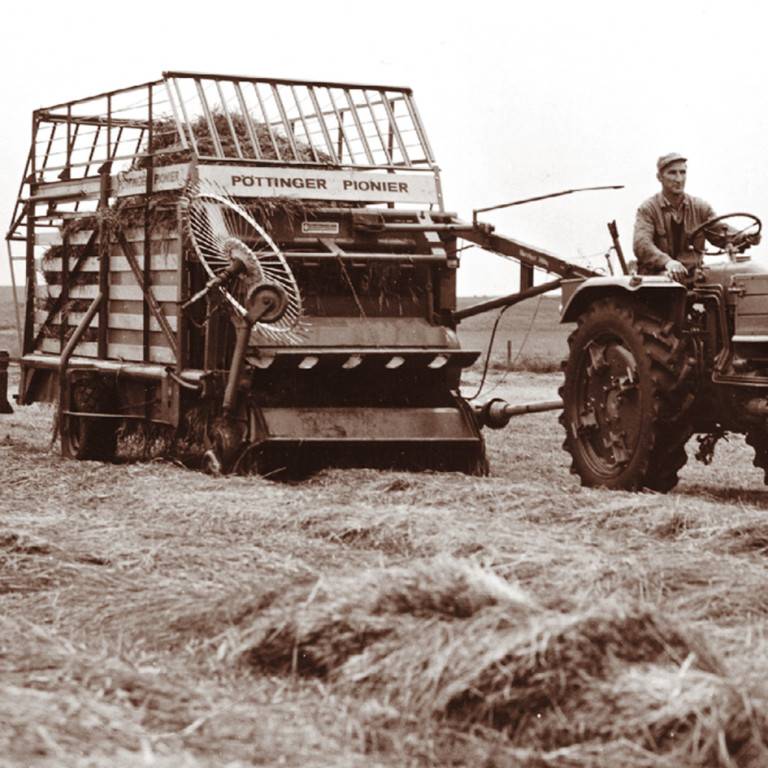 In the 1950s and 1960s, the company became increasingly involved in grassland equipment for mountain farmers. The first of these was a motor mower that could be used on slopes with a gradient of up to 80 percent. The development of the conveyor rake was a great moment for the company and revolutionised mechanisation on steep terrain.

The next developments in forage harvesting came one after the other: The self-loading wagon was based on the hay loader. Pöttinger was a pioneer in loader wagons and has been the world market leader ever since. The first of these was the LW 14 Pionier with a load capacity of 14 m3, a wagon without a chopping system for loading long stalks of grass. A decisive phase in development was the idea of building a loader wagon with a knife bank. This chopping system had 2 to 6 knives in most cases. The third development step involved a chopping system with a large number of knives, i.e. a short-chop loader wagon combined with rotor beaters for unloading. A loader wagon with the name TREND became a success throughout Europe. The launch of the JUMBO high-performance loader wagon for covering large areas in 1999 revolutionised silage making technology. Since then, the loader wagon has been gaining significance worldwide as a cost effective alternative to the self-propelled forage harvester.

During the 1960s and 1970s, maize farming took Europe by storm. That was when the company took the chopping technology used on loader wagons and adapted it for a new application. The MEX maize forager entered the market in 1969 with overwhelming success. The word "mexen" caught on in German and is now a common term among farmers. A special product development in the 1980s was the new generation of mowers with the name CAT. The musical of the same name had its world premiere at that time.

With the development of its own IMPRESS round baler, which was launched in 2016, Pöttinger landed another successful first in the grassland segment.

The lion in the field

In the meantime, the grassland professional also investigated the tillage sector. By acquiring the Bavarian Plough Factory in Landsberg am Lech, Germany, in 1975, cultivators (SYNKRO), ploughs (SERVO) and power harrows (LION, the lion in the field) were now part of the company's standard product range.

In 2001, following the takeover of the Rabe plant in Bernburg, Germany, the course was set for another product segment. Pöttinger seed drills meet the highest demands in functionality, reliability and performance. The extensive range of machines includes mechanical and pneumatic seed drills, as well as equipment for mulch drilling. From August 2021 onwards, one of the last gaps in the product range of the traditional Austrian company will be closed: With rotary hoes, row crop cultivators and tine harrows, Pöttinger offers flexible and efficient machines to meet the new challenges in crop care.

Honour the past - be the future.

With groundbreaking innovations such as the new JUMBO loader wagon, the AEROSEM FDD front hopper seed drill, the software link to agrirouter, Next Machine Management and many other solutions in the field of digital agricultural technology, Pöttinger will continue to provide the best possible solutions and sustainable support for agricultural work in the future. Gregor Dietachmayr, Spokesperson for the Management Team, paints a positive picture: "We are continuing to carry on the pioneering spirit of our founder. With our proven machines and new developments, we are always at the cutting edge. We have inherited the ability to think in terms of solutions from our predecessors, which is why we can look to the future with optimism. We are very aware of our responsibility towards future generations. As a reliable and sincere partner, we will continue to take on the challenges in the future so that we can meet customer requirements in the best possible way."